Hello from my website after a long time. I write on here very rarely… but concerts info, e-shop, videos etc. is being regularly updated and everything else I post on my Instagram and Facebook accounts. Social networks make the world go round. Well now I’m writing in a difficult time when it’s mainly coronavirus that makes the world go round and it has an impact on everybody’s life. I wish you all to stay healthy and successfully deal with the current situation.

When I look back at 2019, I can see mainly a row of shows, especially with Dymytry and my Drumming Syndrome. It was a big load of concert experience where I had the opportunity to play in front of large crowds, thank you so much for that. Much appreciated.

In September 2019 Dymytry released a new album called “Revolter”, which was awarded gold in a few days and platinum in a few weeks… I released two drum videos from this album. The first one is from the studio recording of the song “There is no way out”, the second one from shooting the video for the song “Chernobyl”.

In the second half of 2019 I published two videos… In the first one I play a song by one of my favorite drummers, Dave Weckl. From his repertoire I had chosen “Road to Connemara” and slightly rearranged it into my “Drumming Syndrome” interpretation. Learning individual parts of the song and very creative grooves were a big challenge for me and I spent hours practicing. Although I have great respect for Dave Weckl, my goal was not to imitate his playing style, but to bring my own creativity and more “rock” style of playing into some parts of the song. Dave Weckl will always remain one of my drummer heroes and this video is a sort of a small tribute to him…

In the second video I came up with a pop song. Although my heart is mostly rock and metal, I enjoy listening to other music styles and I respect a lot of artists from different genres.

It was The Chainsmokers who have caught my attention in the recent years; they have been making high-quality dance and pop music which I like thanks to their modern sounds and energy. And it is the energy that is important for my drumming, so I chose their song “Don’t Say” to play. I adjusted it a bit as usual and rearranged it into my “Drumming Syndrome” style. 😉

Earlier this year I started working hard on the new Drumming Syndrome concert programme. The intention was to make it even more attractive thanks to popular rock, metal and pop tunes. And during practicing in my rehearsal room I started recording pieces of my favourite songs and then posted them to my social networks and YouTube under the name “Drum Cave Videos”. You can watch one of these videos if you click on the link below and all my “Drum Caves” can be found in the VIDEO section here.

This year you had the chance to see the new Drumming Syndrome programme in several venues in our country until we were hit by the restrictions related to the coronavirus pandemic, when concert activities had to be interrupted. I managed to play about a half of my tour, which I called the “Drums’n’Rock’n’Metal Hits Tour”. Other dates are being postponed, be patient please, there’s nothing else we can do at the moment… :/ I hope to see you soon at the remaining dates, as well as at the Dymytry tour dates and other events … Here’s the “Drums’n’Rock’n’Metal Hits Tour” video-invitation.

About a year ago I made a Q&A video to answer your questions that you had posted on Facebook and Instagram. I received lots and tried to answer all of them, at least briefly.

Last but not least, one of the most important and crucial events of last year was, of course, the birth of my son Adam. Check out the video, shall he become a drummer too? 🙂 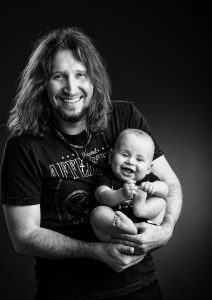